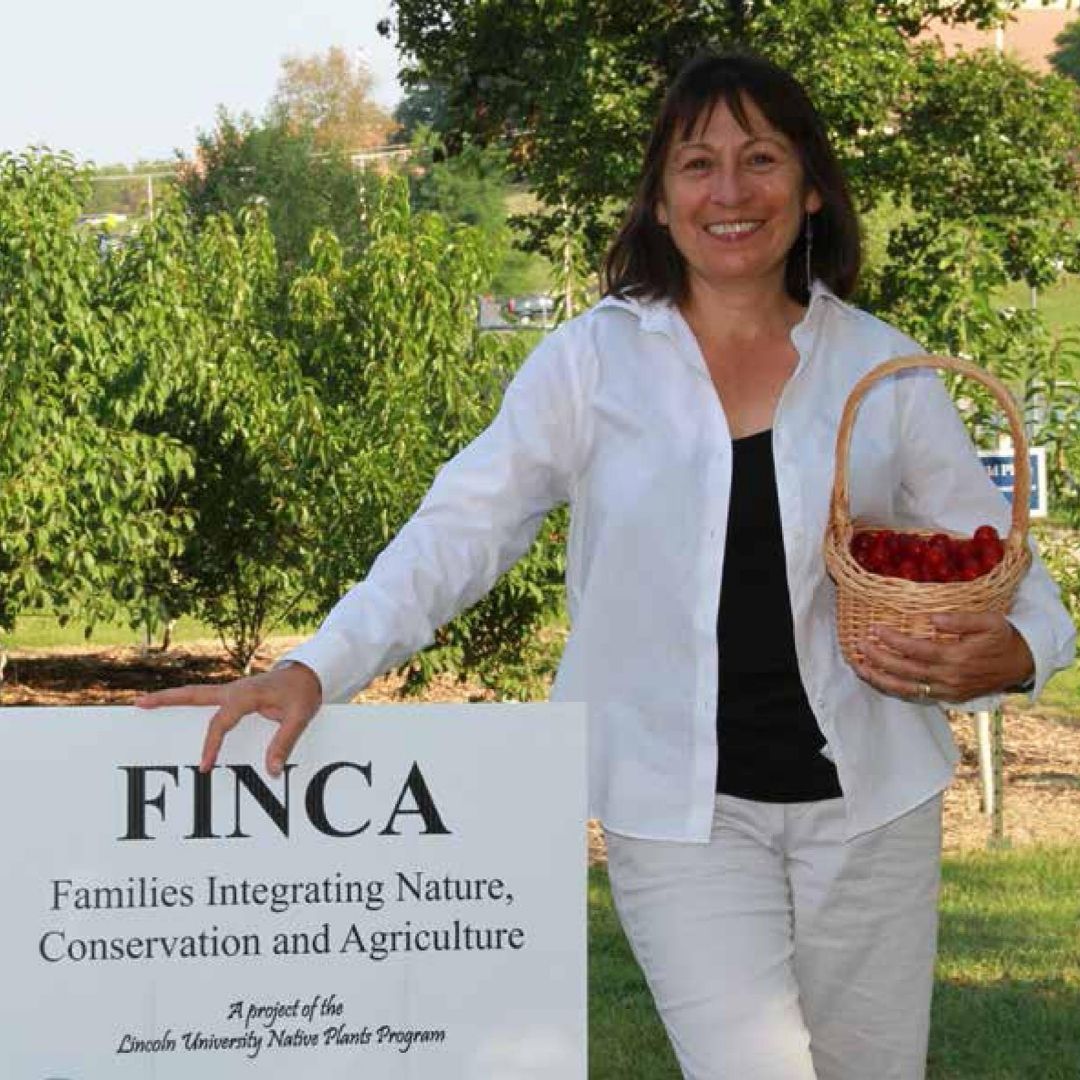 Where did you study and what was your major field of study?
Universidad de El Salvador/Agronomy and Southern Illinois University/Forestry and Plant Biology

Briefly describe your current job.
I am in charge of the Specialty Crops/Native Plants Program at Lincoln University Cooperative Extension. My job is 100% outreach and education and I focus on promoting native plants as specialty crops and their importance in conservation, especially because their relationship with native pollinators. Our target groups in Cooperative Extension are low-income populations and minorities to help them improve their way of life. We work with others as well.

How do you use your native plant and/or prairie knowledge in your career today?
I use it everyday. Either at work or my daily life, native plants are a big part of both. Some examples of the projects are: in 2012, I created the FINCA model that consists of establishing small farms with at least 80% perennial native plants, either for human consumption or for other uses in sustainable agriculture. Others are adopting similar practices now and we have a fully established Finca at Lincoln University. Other projects include Dining Wild, which is an event that includes a diner with recipes prepared at least with one native edible plant. This year, in collaboration with Grow Native! and MDC, we launched the Native Plant Academy, a training program that consisted in online and in-person training. We discovered that there many people with little background in plant sciences who want to learn more about native plants, and they found this training perfect to get them started.

What is the most satisfying aspect of your current work?
There are various aspects that make my job satisfying, one of them is to run into people that tell me that I influenced them to adopt native plants in their yards or in other ways that have positively impacted their lives. It is wonderful to see kids’ faces and parents’ too, when they see for the first time a monarch caterpillar munching on milkweeds or spicebush swallowtail caterpillars on spicebush leaves, and better, when I learn later that they have milkweeds and spicebush in their yards now. This year, we were at the Missouri State Fair in Sedalia, and we brought ripe wild plums. Many fairgoers were intrigued by them and tried them for their first time. For others it served as reminder of the resources we have but don’t get used.

What native plant/prairie classes or trainings were especially important to your career?
There are so many people and events that helped me get where I am. My first introduction to native plants in this country was when I lived in Southern Illinois and visited the Shawnee National Forest. I joined the Sierra Club in Carbondale and went on hikes with them. My first sight of bluebells in bloom blew me away! It was a sight that I would not see in my tropical country El Salvador. My visit to Shawnee caused me to change careers: instead of going to Florida or other southern states to study citrus, I decided to stay and get my degree in forestry and later in plant biology. At Southern Illinois University I was lucky to take Dr. Robert Mohlenbrock’s class about rare and endangered species and environmental interpretation from Dr. Paul Yambert, a wildlife biologist and naturalist. Both retired a year after I took their classes. In Missouri, when I joined the Native Plant Society in 1999, I first saw prairie blazing stars at Painted Brush Prairie. All these helped me to focus my research on native plants to move later to do outreach and education. Recently, Doug Tallamy has been an inspiration to me. Although I was already working with native plants, I did not know much about their interdependence with insects and other wildlife; maybe I knew it, but he opened my eyes. Now, I appreciate and treasure on-going training offered by Grow Native!, which is really important to keep us updated on happenings about native plants and prairies and also what others are doing elsewhere in Missouri and beyond.

What other subjects have you studies that have been important to your career?
Nitrogen-fixing plants—legumes and others is a topic that fascinates me. I completed my PhD study on legumes native to El Salvador and to the Midwest. I have also worked with native-cool season grasses, a group that is not well studied yet. I work with native plants for human consumption and native plants for their potential as specialty crops. Now, I want to learn more about mycorhizae and the relationship with native plants to be more successful when we restore a prairie or a garden.

Please describe volunteer or field work that was formative to your education and career.
In my country El Salvador, I joined Amigos del Arbol, a non-profit organization that did education on sea turtle conservation and mangrove restoration, I learned with them about the importance of citizen involvement to protect areas. We also worked with the communities that depended on these resources. Turtle eggs were commercially sold in El Salvador. Due to the work that this and other NGO’s did, now there are laws that prohibit these activities. In Southern Illinois, I worked as a volunteer for the NGO Citizens’ Recycling Coalition and with the city. Here, I also work as a volunteer for the Sierra Club promoting the protection of natural areas. In Missouri. I was also a member of the Illinois Native Plant Society. In Missouri, I joined the Native Plant Society when we first came in 1999. I have volunteer for the City of Columbia and for other groups in Columbia all these years. Joining all these groups have helped me to learn about different points of view, which is important to be sensitive about peoples’ preferences.

What materials and technology are must-haves for your field?
Online resources are good, but I don’t rely on them entirely. I prefer to have books. Starting with the three volumes of the Styermark’s Flora of Missouri by Yastchyevich, I own more than 20 books about native edible plants, Identification books published by MDC; publications and online information by the XERCES Society they all complement each other. I love to use the resources online published by Grow Native!

What advice would you give students or others wanting to go into your field?
Start slowly. If you want to learn about native plants, don’t feel that you are behind because you are just beginning. Be humble. Recognize that others may know more that you do. Find a mentor, there are many native plant experts and enthusiasts that would love to share their knowledge with you, no matter you age or where you come from.